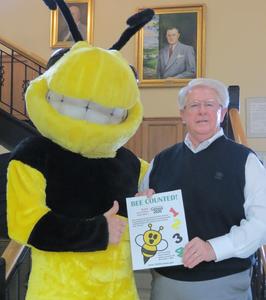 Greeneville and Greene County officials have teamed up to share the importance of being counted in the 2020 Census.

Beginning March 12, households will receive official mail with detailed information on how to respond to the 2020 Census online, by phone, or by mail, according to the U.S. Census Bureau.

The population numbers gained through the 2020 Census will be crucial in determining levels of funding for roads, schools, health care and a variety of programs that impact the community.

“Dollars are apportioned out to us based on our population,” Greene County Mayor Kevin Morrison explained. He gave an example of population being a “heavily weighted factor” in whether national chain restaurants and other businesses locate here.

“Help us recruit business and industry by standing up and being counted,” Morrison said.

Mayor Morrison has appointed a committee to work toward ensuring that every local citizen is counted in the 2020 Census.

The committee is seeking local census workers, especially in the areas of Tusculum and Mosheim. To apply online, visit www.2020census.gov/jobs.

The committee also has applied for a grant for a local marketing campaign to share awareness about the 2020 Census. Mayor Morrison and Greeneville City Administrator Todd Smith agreed to provide funding at a split of 70 percent county and 30 percent city, up to $12,000, with hopes that the grant will cover most of the cost.

Moving into the partnership phase of its efforts, the committee is seeking individuals, groups, and agencies who are interested in holding events and sharing information on the importance of being counted.

Anyone interested in helping can contact Justin Reaves, Chief Deputy of the Greene County Election Commission, at 423-798-1715 or justin.reaves@greenecountytngov.com.

One of the committee’s partners is Greeneville Mayor W.T. Daniels, who has issued a challenge for citizens to “Bee Counted.”

Mayor Daniels will have a sidekick named Benny The Bee with him during census time as a fun way to raise awareness to the challenge of beating the local response rate to the 2010 Census.

To see the ongoing adventures of Benny and the Mayor, visit the Town of Greeneville’s Facebook page at www.facebook.com/TownofGreeneville.

Census Day will be observed April 1 nationwide. By this date, every home will receive an invitation to participate in the 2020 Census, according to the U.S. Census Bureau.

In April, Census takers will begin visiting college students who live on campus, people living in senior centers, and others who live among large groups of people. Census takers also begin in April conducting quality check interviews to help ensure an accurate count.

In May through July, Census takers will begin visiting homes that haven't responded to the 2020 Census to help make sure everyone is counted.

The U.S. Census Bureau stresses that responses to the census are protected by law and cannot be released to identify citizens individually. The information is used for statistical purposes only such as helping inform decisions for new hospitals, schools, and roads, according to the bureau’s website.