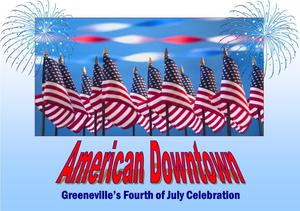 The Town of Greeneville announces the 8th annual American Downtown 4th of July Parade will be held caravan style, due to COVID-19 restrictions.

The Andrew Johnson Bank Parade, which normally fills Main Street with large numbers of participants and spectators, will be driven in a caravan throughout the city to comply with social distancing guidelines to prevent the spread of Coronavirus.

A starting time for the parade on Saturday, July 4, is yet to be determined as organizers finalize plans for the rest of the American Downtown celebration, including entertainment and fireworks.

A final decision will be made and announced on June 4, according to Amy Rose, Public Relations Manager for the Town of Greeneville.

“Most cities in our region have cancelled their 4th of July celebrations this year, but we are working hard to keep ours going as much as possible,” Rose said. “We’ve held several Zoom meetings to brainstorm ideas for celebrating while keeping everyone as safe as possible.”

Gov. Bill Lee’s “Tennessee Pledge” for safely reopening the state’s economy limits attendance at social gatherings including festivals and parades. On Friday, May 22, the limit increased from 10 people to 50 people, which remains in effect until June 30.

To meet this guideline, participants are asked to enter decorated motor vehicles only, and spectators are asked to safely stay home or practice social distancing at their parked cars as the caravan slowly passes by.

The caravan-style parade will drive through residential neighborhoods and pass by parking lots in various locations throughout the city.

Anyone who would like to see the parade come to them can submit their location via the Town’s website, www.greenevilletn.gov, or by calling Parade Organizer Chan Humbert at 423-329-7400.

To participate in the caravan, call Humbert or contact Rose at Town Hall, 423-639-7105, arose@greenevilletn.gov.

All local veterans, organizations, businesses, classic vehicles, churches and anyone wanting to show their patriotism throughout the city are invited to enter, free of charge.

Participants are encouraged to decorate their vehicles with a patriotic theme and to dress in patriotic attire.

The theme, Grand Marshall, and more details of the caravan-style parade will be announced soon.

“We are so thankful to our sponsors for continuing their support of this year’s event during such unprecedented times,” Rose said.

In addition to Andrew Johnson Bank, sponsors of American Downtown are: Waste Industries,