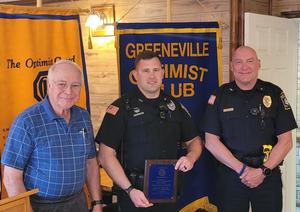 Greeneville Police Officer Matt Stanley has been named Officer Of The Year by the Greeneville Optimist Club.
Stanley, a graduate of Chuckey-Doak High School, is a full-time officer and member of the Special Response Team who has worked for the Greeneville Police Department for six years.
He was nominated by GPD Lt. Eddie Key, who described Stanley as true leader and “invaluable to the 120 shift and the department as a whole.”
“Matt is always willing to do the job and more,” Lt. Key said. “Although Matt was injured and not on patrol for several months this past year, he continued to be an asset to the shift and the department. I am not nominating Matt for one thing, but for the totality and quality of his work.”
Stanley serves as the shift training officer, conducting scenario-based, hands-on training on night shifts. He is a firearm instructor for the shift and organizes GPD’s quarterly firearms training.
He was recognized at the Optimist Club’s recent “Respect For Law” awards ceremony and received an engraved plaque “in recognition of outstanding community service.”
The Respect for Law Officer of the Year Award has its roots in a program founded in 1965 when former FBI Director J. Edgar Hoover and International Optimist Club Past International President Carl Bowen created the Respect for Law Community Program.
More than 1,500 Optimist Clubs nationwide participate each year in recognizing local law enforcement officers who go above and beyond the call of duty.
Stanley (center) is shown here with Hugh Seaver of the Optimist Club (left) and Police Chief Tim Ward.
Congratulations, Matt!