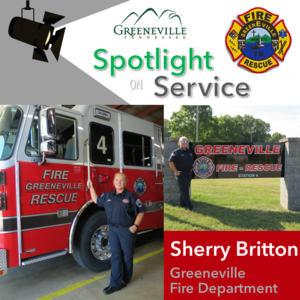 Sherry has worked for the Greeneville Fire Department for 13 years. Her home station is No. 4 on Mt. Bethel Road, but she rotates to other stations and occasionally serves as lieutenant.
She drives fire engines

, and is an Advanced Emergency Medical Technician (EMT)

. Additionally, she has worked for 26 years in the safety department of Walmart Transportation.
When it comes to working in the fire department, her favorite aspects are helping people and the variety of each day. Sherry’s least favorite parts are missing holidays, birthdays, and other special occasions with her family.
Raised on a farm in Rogersville with four sisters and three brothers, Sherry graduated from Cherokee High School. She earned certification in child development from Walters State Community College. Though that might be a bit of a surprise, Sherry was a Headstart teacher for six-and-a-half years. Seeking to earn more money, two now-retired firefighters encouraged her to take the test to work for the Town of Greeneville. Ninety-six people took the test at that time, and she was one of the six who passed.
Sherry is often the winner of our Town Wellness Program walking challenges, logging an astronomical number of steps each time. Every morning, she walks 2 miles on a treadmill.

“I don’t sit still,” she said. “I’m always doing something.”
Sherry and her husband of 18 years, Allen, live in Mosheim. They have six grandchildren, all age 6 and younger. Playing with those grandchildren helps her get more steps each day.
Although she doesn’t mind being the only female in the Greeneville Fire Department, she encourages females to apply and even offered to help them prepare for the test.
“I’d like to have a fire department sister,” she said.