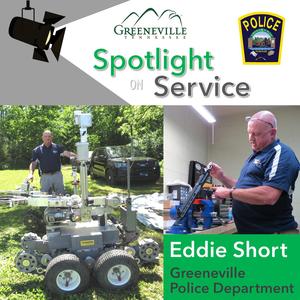 Today, we'd like to shine the spotlight on one of our own, police officer Eddie Short.
When Eddie Short was growing up, he dreamed of becoming a police officer. Twenty-seven years ago, his dream came true when he started working as an Auxiliary officer with the Greeneville TN Police Department.
After 10 years in Auxiliary, and 17 years as a full-time officer, Eddie plans to retire in a couple of years. In the meantime, he will continue to use his specialized skills and pursue his purpose of helping people.
Eddie’s regular duty is to work in traffic. He patrols for speeding motorists throughout the city in an effort to keep people safe and even save lives.
“I’d rather write someone a ticket than have to tell someone they’ve got a loved one that got killed in a car crash,” he said.
He began working in traffic five years ago as part of an effort started by GPD in 2012 to reduce speeding drivers on the 11-E Bypass. Since 2014, traffic crashes have been reduced by an estimated 40 percent, he said. This reduction is good for Greeneville because it increases the safety record, which helps with funding for traffic control, and it improves insurance ratings which lowers auto insurance rates, he explained.
In addition to traffic, Eddie has several specialized skills. He reconstructs crashes, using various calculations to recreate what happened in motor vehicle accidents.
He serves on the Special Response Team, commonly known as the SWAT team, and on the Bomb Squad. He recalled several incidents in which the Bomb Squad had to inspect and dispose of old dynamite, grenades, and even cannonballs.
Eddie also is the armorer for GPD, meaning he makes sure the department’s guns and other armor are functioning. If there are any problems, he repairs them or disposes of the equipment properly.
He serves on the Tennessee Public Safety Network, a statewide organization that responds to stress and trauma experienced by law enforcement officers, other public safety personnel, and their families. The network is designed to prevent adverse effects caused by on-the-job trauma including: heart disease, shorter life span, divorce, alcohol or other substance abuse, suicide, depression, and Post Traumatic Stress Disorder (PTSD).
The network’s services include: critical incident stress debriefing, peer support, and assessment and referrals for such issues as relationship/marital difficulties and alcohol and substance abuse. Services provided by the network are confidential.
Eddie worked as a detective in GPD’s Criminal Investigation Division (CID) for two years, but said he prefers working with the general public and meeting new people. One of his main goals in being a police officer is helping people improve their lives by changing their behavior, instead of putting them in jail, he said.
Eddie was born and raised in San Antonio, Texas. His parents are originally from Hawkins County, and when they moved back home, Eddie met his wife, Linda, who is from Greene County. They have been married 40 years and have two sons, Jalen, 17, and B.J., 32. In his spare time, Eddie is an avid gun collector and he enjoys playing golf and seeking antiques with his son.
For more information on the Greeneville Police Department, visit their page under “Public Services” at www.greenevilletn.gov or visit Greeneville TN Police Department