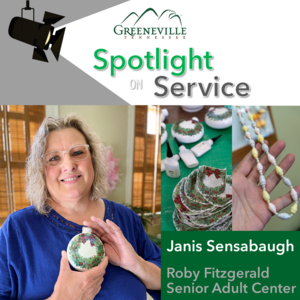 Santa is not the only one who has a busy workshop this time of year! If you visit the Roby Fitzgerald Senior Adult Center in autumn, you will find Janis Sensabaugh and helpers creating Christmas magic.

Janis has been leading the sewing and craft department at the Roby Center for 15 years. That first year, she started the job on November 12th, and just one month later, had over 400 Christmas ball ornaments ready to gift to the center members at the annual Christmas luncheon. The luncheon is a special tradition the Roby Center started in 1998 and usually takes place at Link Hills or the General Morgan Inn. The members and staff look forward to it each year.

This year, Janis and her helpers are making Christmas ornaments that have the look of being hand-painted, but can be finished quickly. It’s a clever craft idea, using a napkin design applied with Mod Podge onto white store-bought ceramic ornaments. After the Mod Podge dries, some glitter paint is added to enhance the glitz and glamour. That is the look that Roby Center Director, Glenda Blazer, loves to see. Janis says Glenda likes an expensive look on a small budget!

When asked about Janis, Glenda said cheerfully, “She always comes through!” It seems clear that sentiment was evidenced in Janis’ first year at the center, and her creativity has never run dry. To keep the ideas flowing, she keeps an online idea board on Pinterest and she follows many craft-oriented Facebook pages and groups. She does a great job of keeping costs low by using discarded items such as light bulbs, newspapers, and magazines. In fact, thousands of paper beads were made by members during Covid. It was an easy craft to send home with people. Paper and, you guessed it, Mod Podge, were wrapped around a toothpick and then slid off when dry. These beads were strung into necklaces that look much more expensive than the materials that produced them.

Janis has always been creative. She first showcased her talent by selling painted t-shirts and sweatshirts on consignment at “Ye Olde Tourist Trap” years ago. Many recall that business when it was in the Yates Building on Academy Street. Janis enjoyed working with Eugene and Sue Hice there and began to explore different media through acrylic and watercolor painting classes.

At one point in Janis’ career, she knew that she needed to make more money. Driving down the road, she was thinking about this and praying that she would find a job that would allow her to better provide for her family while utilizing her creative talents. Just a few days later, a friend told her about the craft job at the Roby. She applied and got the job. Janis has always considered the position an answered prayer.

Through the years at Roby Center, Janis has offered a variety of classes including rug making, quilting, painting, and knitting classes. Working on crafts helps Roby members keep their memories sharp, as well as their dexterity and fine motor skills. The feeling of accomplishment they get when they finish a project is priceless. Janis says the key is to start small and work up from there. For example, one class on knitting socks ending up being a long-time hobby for one member. Since Covid, Janis has taken on more responsibilities of the office work, answering phones and completing paperwork. Glenda and Janis have been flexible, keeping the center going through the ups and downs of the pandemic.

Janis says that the best part of her job is that she gets to come to work and play. It doesn’t feel like work to her, especially when she gets in her zone. Janis has two daughters, one who is talented with ceramics. In the future, Janis said that she might experiment with teaching ceramics, and she also wants to bring more basket making classes to the members. If you are interested in taking classes at the Roby Center, call 423-639-3128. Membership is just $10/year.