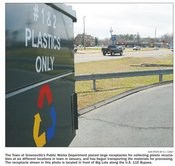 More than 5,000 pounds of local non-biodegradable plastics have avoided the landfill since January as a result of new efforts by Greeneville’s Public Works Department.

At the beginning of the year, the department placed bins for collecting PET No. 1 and HDPE

No. 2 type plastics at various locations where newspaper and cardboard recycling bins were already available to the town’s citizens.

So far, two truckloads of plastics have been collected and transported to the Goodwill Industries recycling facility in Russellville for processing, Public Works Director Brad Peters said.

On the first trip, approximately 2,320 pounds were transported and sold. The second load was larger, at approximately 3,000 pounds, Peters said.

The plastic was sold at the current price of 7 cents per pound — or, a little more than $478 for both loads.

Additionally, preventing more than 5,200 pounds of material from going to the landfill has resulted in a savings of just over $106 in tipping fees so far, Peters said.

“We don’t have any hard numbers on our expenses, but we feel that the fact we’ve kept over 5,200 pounds of non-biodegradable material out of the landfill speaks volumes about this community,” Peters told the Sun recently.

“We’re very pleased with the participation to this point.”

The Public Works Department placed the new recycling plastic bins after the Greeneville Board of Mayor and Aldermen expressed support for such an effort in September 2013.

Jennifer Reynolds, director of Keep Greene Beautiful, a program of the Greene County Partnership, approached the board with concerns about the Greene County government’s decision to temporarily stop transporting plastic for recycling.

Reynolds said she was concerned that local residents who had been using the county’s recycling bins would, essentially, “get out of the habit” of recycling.

If the town were to offer bins for plastic recycling, Reynolds said, county residents already accustomed to separating recyclables from household garbage would be able to continue doing so,

making a trip to one of the town’s recycling bins in addition to going to their usual county convenience centers for trash drop off.

In addition, Reynolds said, the town’s residents would be able to easily separate plastic from other household trash.

At the time the county stopped picking up plastic for recycling, Greene Couny Solid Waste Director Hubert Metcalf said the county’s stoppage was “temporary,” and was related to a drop in the price of recyclable plastic.

The county stopped transporting the plastic materials in August, but has since resumed doing so.

Metcalf said those operations started back up about two months ago.

He said that, when the revenue the county receives from selling the plastic for recycling is compared with the cost of fuel to transport the plastic to a recycling facility, “We’re pretty much breaking even right now.”

Receptacles for plastic recyclable materials are available at all 17 of the county’s convenience centers.

In a January news release announcing the Town of Greeneville’s new plastics-recycling effort, Peters noted that, like the town’s existing paper and cardboard recycling program, the plastic recycling initiative is driven by participation.

He went on to explain that the town’s plastic- recycling truck travels to the processing center only when the truck is full.

The town has urged Greeneville and Greene County citizens to take advantage of the plastic and paper recycling options as a means to save space in landfills and reduce solid waste disposal fees.

“The Town of Greeneville realizes that we have a responsibility not only to the environment, but to our taxpayers, to collect and dispose of solid waste in the most efficient way possible,” Peters said when the recycling effort was announced in January.

Peters credits his staff in the Public Works Department for making the town’s program successful by working out the logistics of the effort.

The department has dedicated one of its older trucks to plastic recycling and has added a plastics route to existing collection routes for garbage and paper recycling.

Peters said Public Works staffers took on the responsibility of “coming up with solutions to some of the equipment and logistical issues we’ve had to overcome.”

— PET No. 1 and HDPE No. 2. PET No. 1 plastic can be founnd in items such as soft drink and water bottles, mouthwash bottles, peanut butter jars, salad dressing bottles and vegetable oil bottles, among others.

Those wishing to recycle such materials are asked to check the bottom of each container for a numeral identifying the type of plastic as 1 or 2.

Other types of plastic containers not listed above could also be PET No. 1 or HDPE No. 2, and, therefore, recyclable as well.

WHERE TO RECYCLE IN TOWN

The Public Works Department bins for collecting plastic recyclables can be found at the following locations: 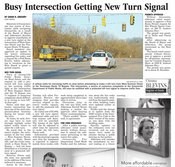